New Song History: "I Once Loved A Lass..." - The Story Of The ”False Bride” And Her Forsaken Lover

There is a new song history available on my website Just Another Tune:
This is about a very old family of songs. The earliest examples - two broadsides and a tune - are from the 17th century. Today "I Loved A Lass" - first recorded by Ewan MacColl in 1965 (here at YouTube) - is quite popular among Folk singers. The song was also known under titles like "The Week Before Easter", "The False Hearted Lover", "The False Nymph", "Love Is The Cause of My Mourning" etc.
Eingestellt von Jürgen Kloss um 3:03 PM No comments:

In the last decade of the 19th century a couple of songbooks were published for nostalgic readers. Most important and influential surely was Helen Johnson's Our Familiar Songs.  Five years later Henry Reddall's Songs That Never Die followed. These collections show nicely which songs had survived until the end of the century. Both books include interesting comments on these songs' history. Some of these introductory remarks should be read with considerable caution because they are based on apocryphal stories popular back then, as for example the one about "Robin Adair" . Others are still helpful.

Some newspapers had special sections dedicated to old songs. One was the Family Herald And Weekly Star in Montreal. In 1898 they published a collection of songs presented there in the years 1895-98, often with music and interesting introductory remarks:

Also worth reading  are S. J. Adair Fitzgerald's Stories Of Famous Songs. This had started as a series in Lloyd's Weekly Newspaper (London) in 1894 but then was published as a book in 1898 and again in 1901. A second volume was added in 1910. He wrote about the history of songs like "Home, Sweet Home", "Robin Adair", "Auld Lang Syne" and many more;

A decade later two songbooks were published that are also of interest:


These were directed at teachers and children and also offer good selections of old songs.

A New Song History: "Brennan On The Moor"

I have just posted a new song history on my website:

The Clancy Brothers used to sing this song, some versions from the early 60s are available at YouTube (1962 & 1963, both from TV shows) but the first one to record it was Burl Ives in 1949 on his LP Wayfaring Stranger (Stinson SLP-1).

Brennan was an outlaw in Ireland in the early years of the 19th century. It’s often claimed that he was executed in 1804 but it’s more likely that this happened in 1812. Otherwise not much is known about him but I was surprised to find some magazine articles about a highwayman named Brennan from 1809 and 1812. Here is one from the The Edinburgh Annual Register for 1809 (Vol. 2/2, 1811, p. 44): 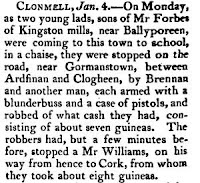 The modern versions of “Brennan On The Moor” are all derived from a long ballad that was printed regularly in Ireland and England since the 1840s and in North America since the 1860s. I found this undated broadside in An Album Of Street Literature, available at The Internet Archive (p. 294):

Bob Dylan was a great admirer of the Clancy Brothers. His “Ramblin’ Gamblin Willie” (1962) is based on their version of “Brennan On The Moor”. Here is a live performance of Dylan’s song by the Clancys themselves with Robby O’Connell in 1996 as well as one by Liam Clancy in 2005 at a Dylan Tribute show.
Eingestellt von Jürgen Kloss um 2:51 PM 1 comment: