I am at the moment quite busy with Friedrich Silcher's collection Ausländische Volksmelodien, published in 4 booklets between 1835 and 1841 (available at the Internet Archive; see also this text in my blog). This was the most successful and influential German anthology of what was regarded at that time as foreign national airs ("Volkslieder" or "National-Lieder") and remained on the market in several new editions until well into the 20th century. A considerable number of these songs also became part of the common song repertoire in Germany. They reappeared in collections for schools, choirs and domestic music making and some are even still performed today.

As already noted Silcher's most important source were two of Thomas Moore's publications, the Irish Melodies (10 Vols., 1808-34) and especially the Popular National Airs (6 Vols., 1818-28; for more about these works, see here in this blog) that served as a kind of backbone. 25 of the 40 tunes were borrowed from Moore and included either with a translation of the original text or with new lyrics from other sources. In some way this was an early inofficial German edition of Moore's songs.

What most intrigued me were the Scottish songs in the Popular National Airs, of which Silcher used three. Apparently he had - unlike other editors from that era - no access to original collections from Scotland like the Scots Musical Museum, George Thomson's works or R. A. Smith's Scotish Minstrel and therefore he had to rely on what was offered by Moore. In Vol. 4 (1823; see Glover ed., 1860, pp. 289-291) he found "Here Sleeps The Bard". Thomas Moore had written new words to what he called a "Highland Air". I always wondered if this song was intended as some kind of tribute to Robert Burns :

Here sleeps the Bard who knew so well
All the sweet windings of Apollo's shell,
Whether its music rolled like torrents near,
Or died, like distant streamlets, on the ear.

Sleep, mute bard! alike unheeded now.
The storm and zephyr sweep thy lifeless brow;--
That storm, whose rush is like thy martial lay;
That breeze which, like thy love-song, dies away!

Silcher used it as the opening song of his collection (Heft 1, 1835, No. 1, p. 2) with a translation by Swabian poet Hermann Kurz:

He also wrote an arrangement for four male voices (publ. posth. in Silcher, Volkslieder, 1891, 1902, No. 150, pp. 274-5). This song was clearly one of his favourites: "Von einem großen Chor gesungen, macht die Musik eine außerordentliche Wirkung" (Bopp, p. 138). It was even performed at a memorial concert for him after his death (Bopp, p. 163). Not at least this piece became a standard for Männergesangvereine. It was particularly suitable for festive events and funerals. We can find it in numerous songbooks (see for example the list at DeutschesLied.com) and it is still sung today by some of the more old-fashioned male choirs. One may say that it was for a long time the most popular "Scottish" song in Germany. 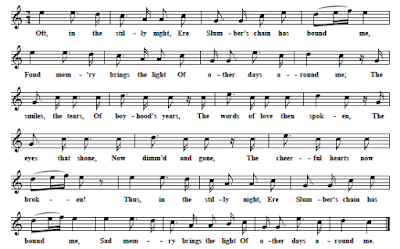 When I remember all
The friends, so link'd together,
I've seen around me fall,
Like leaves in wintry weather;
I feel like one,
Who treads alone,
Some banquet-hall deserted,
Whose lights are fled,
Whose garlands dead,
And all but he departed!
Thus, in the stilly night,
Ere Slumber's chain has bound me,
Sad Memory brings the light
Of other days around me.

Oh! guard our affection, and ne'er let it feel
The blight, which this world o'er the warmest will steal.
While the faith of all round us is fading or past,
Let our truth, at least, keep its bloom to the last.

It is safer for Love to be watchful and weep,
As he us'd in his prime, than go smiling to sleep.
For death on his slumber, cold death follows fast,
White the love that is wakeful lives on to the last.

And tho', as Time gathers his clouds o'er our head,
A shade, somewhat darker, o'er life they may spread;
Yet transparent, at least, be the shadow they cast,
So that Love's soften'd light may shine thro' to the last.

But interestingly in this case he only took the tune which he then used for "Mein Herz ist im Hochland", Ferdinand Freiligrath's translation of Robert Burns' "My Heart's in the Highlands" (Heft 2, 1837, No. 1, p. 1).
At this time not much of Burns' works was known in Germany. Freiligrath was a kind of pioneer in this respect. His second set of translations - including this one - appeared on February 20th, 1836 in the Blätter zur Kunde der Literatur des Auslandes (Vol. 1, No. 4, p. 13-4; see Selle, pp. 60-2). Silcher happened to be among the first who set one of these texts to music. But the original tune - the one published in 1790 in the third volume of the Scots Musical Museum (No. 259, p. 268, available at the Internet Archive), which, by the way, never made it to Germany - was not available to him and he had to combine the text with another Scottish melody. For whatever reason he decided for this one from Moore's collection. It fact it worked quite well. And as an additional benefit the German music fans got Burns and Moore together in one song.
"Mein Herz ist im Hochland" became one of the most popular German "Volkslieder". It was recycled for more than a century in numerous songbooks but later editors preferred to use other tunes. Silcher's rarely appeared again. Interestingly it can be found in some songbooks for schools published after the turn of the century and there it was combined with Burns' original text and described as a "Scotch Bagpipe tune" (see Irmer 1911, p. 66, Simon/Stockhaus 1912, p. 77). Perhaps these editors thought it was the original tune.
In fact in these first two volumes of Silcher's Ausländischen Volksmelodien the Scottish music was represented exclusively by Thomas Moore. Only in Vol. 3 he would include a Scottish tune from another source, "The Bush aboon Traquair", which was combined with a poem by Friedrich Rückert ("Ich wohn' in meiner Liebsten Brust", No. 6, pp. 8-9).

But there is another question that should be raised. I really wonder where Mr. Moore found these three tunes which he sold as "Scottish". I have checked some - not all, of course - relevant collections of Scottish tunes and songs but I haven't yet come across a possible source for any of them. For his Irish Melodies we know most of the sources (see Chinnéide 1959) but as far as I know nobody has ever attempted a similar work for the Popular National Airs. I have also been looking around a little bit for the other tunes borrowed by Silcher, those described as "Venetian", "Italian", "Spanish", "Russian" and the more, but I haven't yet seen them in other earlier collections. So either Moore did really well hiding his sources or one may ask what's the chance that he or his musical partners - Sir John Stevenson respectively Henry Rowley Bishop - wrote a considerable part of them themselves?

Moore & Silcher:
Other Songbooks:
Other Literature