Bob Dylan recorded his version of the popular standard "Corrine, Corrina" (lyrics from BobDylan.com) with a band (including Bruce Langhorne, Dick Wellstood et al.) on October 26th 1962. One take was released on Freewheelin', another one as a single b-side with "Mixed-Up Confusion". Two solo performances have survived: one studio outtake recorded 24.4.1962 and one live version from Gerde's Folk City 16.4.1962. A demo for Whitmark (November 1962) is not in general circulation.

Though there were "Corrinas" already in 19th century music the original inspiration for the 20th century song family may have been a popular song published in 1918, "Has Anybody Seen My Corinne" by Roger Graham and pianist and songwriter Lukie Johnson. Vernon Dalhart's recording (Edison, 1918) is available from the Cylinder Preservation And Digitization Project, an instrumental version by Wilbur Sweatman’s Jazz Orchestra (1919) can be found on redhotjazz.com.

My girl ran away last night,
I did my best to treat her right,
For no reason I can see
I was crazy 'bout her 'fore she was wild about me.

I'm so worried 'bout to cry
To think she left and never said good-bye
Heartbroken and alone
I want my baby to come home.

Has anybody seen my Corrine?
Oh, she's a dream
She is my baby doll
Just like a banfire
She set my heart on fire

I regret the day,
The day that I was born,
[?] my lovin' Corrina has gone
She has done me wrong

If anybody has seen my Corrine?
No matter where Corrina may be,
Tell my Corrina to come right back to me,
I want some lovin' sweetie dear.

This song must have been quite popular at that time. In 1919 songwriters Edward B. Ellison and H.H. Sangston produced a follow-up with the title "Lovin' Corrine Is Comin' Home" (sheet music) to tell t 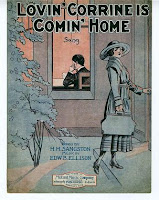 he world that the girl in fact did return:

Blind Lemon Jefferson's "Corinna Blues" (1926) refers only in one verse - that looks as if it was inspired by "Has Anybody Seen My Corinne" - to that particular girl:

In 1927 Frankie “Half Pint” Jaxon recorded a hilarious parody called "Corrine" (revived in 1929 as "Corrine Blues" and in 1939 as "Callin' Corrine", these two versions are available on redhotjazz.com), but that was another completely different work although it might allude to the song by Graham & Johnson.

On December 17th the same outfit - now calling themselves the Jackson Blue Boys - recorded the song for another label and changed the girl's name to "Sweet Alberta"(Columbia 14397-D), using for the most part the same lyrics but this time including Jefferson's "tell her to hurry home" line.

And in December 1930 they recycled the same melody for a song called "The Northern Starvers Are Returning Home" (Okeh 8853) so all important record labels had a chance to get a slice of the cake and the musicians managed to get paid three times for one song.

Bo Chatmon played the fiddle. As Bo Carter he was very busy as a recording artist - specialized in "dirty" songs like "Banana In My Fruit Basket" - until 1940. Charlie McCoy - the brother of Joe McCoy, who was married to and recorded with Memphis Minnie - was an excellent guitar player and mandolinist who took part in many recording sessions. In the 30s he and his brother Joe were members of the Harlem Hamfats, a very popular and influential proto-Rhythm & Blues group with horns. The guitar player on this sessions most likely was Walter Vinson who from 1930 on recorded with the Mississippi Sheiks All three were part of a circle of very versatile Mississippi string band musicians . They used to perform everything from current popular songs to Blues both for black and white audiences. From the late 20s to the early 40s they were among the most often recorded African American artists.

"Corinna" is often called a "Folk-Song" or a "traditional". But the history of this song most likely only began with its first recording and I know of no evidence that it existed before that date. It's for example not mentioned in Dorothy Scarbourough's On The Trail Of The Negro Folk Songs (1925). "Stylistic lineages in this song tend to be fairly transparent, suggesting that transmission occurred not orally, but through the recorded medium" (Harvey, p. 21). Bo Chatmon was an excellent songwriter well-versed in Blues, string-band music and popular song traditions. By all available evidence he was the creator of "Corrine, Corrina".

Maybe he was inspired to write this song by the original "Has Anybody Seen My Corinne". This kind of adaptions of popular songs were not that uncommon. The foremost example is of course the Mississippi Sheiks' "Sittin' On Top Of The World". That song's lyrics were built around a line borrowed from the 1926 hit "I'm Sitting On Top Of The World". Their "Lazy Lazy River" (1931) was surely inspired by - though of course very different from - Hoagy Carmichael's "Lazy River" (first recorded in November 1930).

But it's of course also possible that Bo Chatmon simply took that "Corrina"-verse from Blind Lemon Jefferson's song, rewrote it and built a new Blues with a different melody around that topic. The rest of the lyrics look like a pastiche of popular songs and Blues from the 10s and 20s. Songs like "I Ain't Got Nobody", "Nobody's Blues But Mine", "What's The Matter Now" - all recorded for example by Bessie Smith in 1925 and 1926, or "Oh What A Pal Was Mary" - a 1919 Pop hit - may have been the source of some ideas and floating lines.

Among the earliest and most important covers was one by Tampa Red & Georgia Tom recorded in December 1929 ("Corrine, Corrina", Vocalion 1450). This one must have been very successful as they followed it up four month later in April 1930 with "Corinne Corrina No 2" (Vocalion 1496) including a set of new verses. From then on this song became very popular and crossed all race and genre barriers. McKinley Morganfield recalled it as one of the most popular numbers at local dances in Mississippi (Wald, p. 58) and David Edwards in the early 40s performed it at country dances for his white customers (Edwards, p. 117):

"I played all different kinds of music. We'd all play anything to make that nickel - I'd holler my ass off about that nickel! Sometimes white folks would hire me from off the streets to play at country dances. They liked 'St. Louis Blues', 'Bring it On Down', 'Corinna'. They'd dance all over the floor to 'Corinna', them white folks".

There have been a great number of of covers and adaptions, according to one list I saw there were at least 30 until 1945. The Mississippi Sheiks (Walter Vinson and Lonnie Chatmon) renamed her "Alberta" in 1930. Leroy Carr & Scrapper Blackwell adapted "Corrina" in 1934 as "Hold Them Puppies" and wrote some new lyrics. Lead Belly called her "Roberta" (1935) and Big Joe Turner recorded two fine versions of "Corrine, Corrina" in 1941 and in 1956.

Bob Dylan may have known any of these versions and he surely knew the one printed by Alan Lomax in Folk Songs Of North America (1960) but his adaption was a rather drastic rewrite retaining very little of the original song. "He abandons the happy-go-lucky jugband feel of many interpretations" (Trager, p. 115, line borrowed by Trager from Matthew Zuckerman) and turns it into a slow, mournful Blues. Only very few original lines remain, instead he uses a variant of a verse from Robert Johnson's "Stones In My Passway":


The early live version from April 62 includes some more lines borrowed from Robert Johnson, like the "hellhound" and the "38 Special". In some way he tried to turn it into a "real" Blues á la Johnson and make it different from the Pop-music versions (see Harvey, p. 22). But on the other hand he worked exactly like a Blues writer by taking one element of a song and creating a new one around it. In fact his "Corrina" is so different from the precursors that he could have copyrighted it for himself as it is more or less a new song and not a rearranged "traditional" (besides the fact that this song never was a "traditional"). Interestingly his version became something like another link in the chain: Taj Mahal based his "Corrina" (on Natch'l Blues, 1968, a live performance 2008) on Bob Dylan's variant: he built it around the Robert Johnson - lines and completely abandoned the context of the original "Corrinas".

Many thanks to Stew with whom I discussed this song some time ago & who has supported me with some of the information and links used here.

This is a slightly revised version of a text first posted in July 2007 on morerootsofbob.com .
Eingestellt von Jürgen Kloss um 5:26 PM