"Long, Long Ago", a song written by Thomas H. Bayly and first published in 1839, was immensely popular in Britain and North America during the 19th and early 20th century. In fact it is some kind of "evergreen" and even today the tune is still known:

But the song was equally popular in Germany. It began to appear on sheet music (see for example one edition by publisher Schlesinger, on the market since 1860, here a later reprint, Mus WB 8556, ZB Zürich), broadside sheets and songbooks in the 1860s and then remained a standard at least until the 1930s. Even the children sang "Lang ist's her", as it was usually called. We can find it in numerous songbooks for schools, for example in Gustav Damm's Liederbuch für Schulen, a popular and widely used collection published since the 1880s (here in the 11th ed., ca. 1880s, No. 93, pp. 76-7).


A couple of different sets of lyrics were in use, sometimes still as a love song like Bayly's original, sometimes a text about remembering childhood and mother, as Simon Breu's Deutsches Jugendliederbuch (here 2nd ed., 1909, No. 85, p. 74, both at the Internet Archive).


I have done a little bit of research about the song's history in Germany. A detailed account is now available on my website:
What I found interesting is the strange fact that Mr. Bayly was very rarely credited as the song's author. "Lang ist's her" was usually labelled and sold as an "Irish Folk song", as in the three examples shown above. Of course this dubious claim is completely without any foundation. It was not that difficult to find out the songwriter's name, as did Folk song scholar Ludwig Erk (see f. ex. his Volkslieder-Album, 1872, No. 42, p. 42, later reprint, at the Internet Archive). But Bayly was barely known in Germany and it may have been much more promising to sell the song as "Irisches Volkslied". This was at that time a highly popular genre. Thomas Moore's "'Tis The last Rose of Summer" had been a great hit and "Robin Adair" as well as "Home, Sweet Home" were also often labelled as Irish Folk tunes.


What is even more interesting is that Bayly in fact may have found some inspiration for the song's tune somewhere else, not in Ireland but in Germany. Hans Gaartz in his book Die Opern Heinrich Marschners (1912, p. 42, found in Google Books) noted the similarity of one piece in the latter's Der Templer und die Jüdin (1829) to "the Irish folk tune 'Lang, lang ist's her'". This is song No. 3, "Lied mit Chor" in the piano score of original edition of this opera (p. 29, available at Urmel, ThULb Jena): 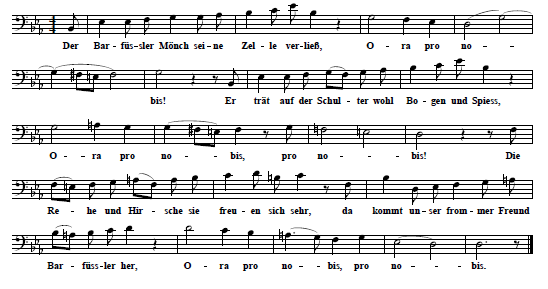 Of course this is in no way identical to Bayly's tune but the relationship is clear to see. What they both have in common is especially the characteristic ascending melody line in the first couple of bars. I think there is good reason to assume that Bayly was familiar with this piece. Marschner's works were known in Britain, the piano score of Der Templer und die Jüdin was also published in London by Johannig and Whatmore. For me this looks like a deliberate attempt to take the characteristic motif, the ascending melody line in the first couple of bars, as a starting-point and then turn the tune into something more catchy, more "folk-like".


Gaartz was apparently not familiar with the real history of "Long, long ago" and insinuates somewhat that Marschner could have been inspired by this alleged "Irish folk tune". In fact it must have been the other way round because Bayly's song only appeared 10 years after the opera. But I find it also very strange that no other German "expert" has seen and noted these obvious similarities.


Not at least it is a little bit absurd that "Lang ist's her" was regularly sold as an "Irish song" while in fact it may have been inspired by and derived from a tune by a German composer. But this was not an uncommon phenomenon. The same happened to "Home, Sweet Home" by Henry Bishop and J. H. Payne which was also immensely popular in Germany. Often enough Bishop's tune happened to be identified as "Irische Volksweise" but it is highly likely that it was also inspired by a melody written by a German composer, in this case J. A. P. Schulz (see Underwood 1977).