Between Burns & Moore: Friedrich Silcher's German Version of "My Love's Like A Red, Red Rose" (1841)

As fair art thou, my bonie lass,
So deep in luve am I;
And I will luve thee still, my dear,
Till a' the seas gang dry.

Till a' the seas gang dry, my dear,
And the rocks melt wi' the sun;
And I will luve thee still, my dear,
While the sands o' life shall run.

Of course this song was also known in Germany and I will discuss here one particular version, the one published in 1841 in the 4th booklet of Friedrich Silcher's collection Ausländische Volksmelodien (No. 7, pp. 10-11): 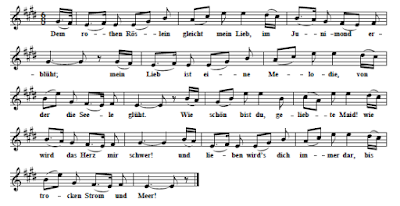 Silcher (1789-1860), music director at the university of Tübingen, composer, arranger, editor, music educator and choirmaster, was one of the most important promoters of the "Volkslied"-genre at that time. Many of the songs published by him are sung until today. A considerable amount of the pieces in this collection of foreign national airs - published in four parts between 1835 and 1841 - became part of the common repertoire of "Volkslieder".


For his German version of "My Heart's in the Highlands" Silcher had selected the translation by Ferdinand Freiligrath. In this case he borrowed the one by Wilhelm Gerhard. I have written a little bit more about Gerhard (1780-1858) in my history of "Robin Adair" in Germany (Chapter 2, JustAnotherTune) so I won't repeat it here. Today he is more or less forgotten but at that time he was among the most important translators and mediators of foreign songs and poetry in Germany. His translations of Burns' songs were particularly popular among composers, first and foremost Robert Schumann, who loved to set them to new music. Today many of his texts sound hopelessly outdated but I assume they already looked old-fashioned when they were first published and perhaps this was what he had intended.

More interesting is the tune used by Silcher for his version. He only described it as "Irische Melodie" but as usual "forgot" to name his source. It is none of the melodies associated with this song in the original British publications. Composer Pietro Urbani had written a new one for the version included in 1794 in his Selection of Scots Songs (pp. 16-7).


Two years later the song appeared in the Scots Musical Museum (Vol. 5, Nos. 402-3, pp. 414-6), but with two different tunes: "Major Graham" by Niel Gow and one called "Mary Queen of Scots". The former - first published by Gow in his Collection of Strathspey Reels (Edinburgh, 1784, p. 7) - was the one Burns himself used with his song.

George Thomson included "O my love's like a red rose" in the 4th Set of his Select Collection of Original Scottish Airs (here in Vol. 2 of the new edition, 1801, No. 89) and he combined it with "Wishaw's Favourite", a tune written by one Mr. Marshall. Interestingly Thomson also noted that the words were "from a MS. in the editor's possession" and in the Index the author is given as "unknown". It seems that he really regarded Burns only as the collector, not the writer of this song. 22 years later R. A. Smith used still another tune in his Scotish Minstrel (Vol. 3, p. 85): "Low down in the broom" is the one that is until today usually associated with this song.


Silcher used none of these four different melodies for his version. The problem was that at that time not many original Scottish tunes were available in Germany, and even less so those of Burns' songs. The authoritative British collections - like the Scots Musical Museum, Thomson's publications and Smith's Scotish Minstrel - were not that easy to get. Only few copies of these books were circulating among the fortunate few and apparently they hadn't yet reached the town of Tübingen.


But Silcher had access to Thomas Moore's works, both the Irish Melodies and the Popular National Airs. In fact most of the tunes in his collection - nearly two third - were borrowed from Moore's publications. He had already taken one from the National Airs for his version of "My Heart's in the Highlands" in Vol. 2 and here he helped himself with one from the Irish Melodies. It was "My Lodging is on the cold Ground", the tune Moore had used for "Believe me, if all those endearing young Charms" (in Vol. 2, 1807, pp. 113-6).
This is also a melody with a very interesting history. Moore's source may have been Thomson's collection with which he was of course familiar (see Chinneide, p. 120). We can find it there also in the 4th Set, 1799 (here in Vol. 2, 1801, No. 76) where Thomson had combined it with a song by Burns, "Farewell thou fair day", even though - as usual - Burns himself had preferred another tune (see Dick, No. 272, p. 254, notes, pp. 458-9; Scots Musical Museum 4, 1792, No. 385, p. 399).

"My Lodging is on the cold ground" was at that time not particularly old (see Olson, Early Irish Tune Title Index). By all accounts it was first printed in 1775 in a collection published in London called Vocal Music: Or The Songster's Companion. Containing A new and choice Collection Of The Greatest Variety Of Songs, Cantatas, &c (pp. 18-9; available at IMSLP): 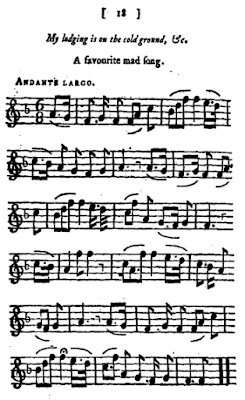 Here it was described as "A favourite mad song". Only the text used with the tune was a little bit older:

My lodging is on the cold ground,
And very hard is my fare;
But that which grieves me more, love,
Is the coldness of my dear!
Yet still he cry'd, Turn, love,
I pray thee, love, turn to me;
For thou art the only girl, love,
That is adored by me!
[...]

On stage this text was sung to a tune said to have been written by composer Matthew Locke which was then also included in a couple of contemporary collections like the Dancing Master and Apollos's Banquet either as "On the cold ground" or "I prithee, love, turn to me" (see also SITM I, No. 64, p. 14). Some ballads from that era also referred to a tune with these titles (see EBBA, the first one listed may be dated too early). Much later Robert Burns also used the melody for one of his songs, "Behold, my love, how green the groves" (see Dick, No. 100, p. 94, notes, p. 384).


It is not clear why D'Avenant's original text was combined with a new tune in the 1770s. This melody's origin is not known. It may be related to a "Gigg" in James Oswald's Caledonian Pocket Companion (Vol. 2, 1745, p. 36, see the references in SITM 1, No. 1164, p. 221, No. 2048, p. 395) but I am not sure about that. After the first known publication in the Songster's Companion it quickly spread among editors of songbooks and was regularly republished and also used for new songs. We find the tune for example in James Aird's Selection Of Scotch, English, Irish and Foreign Airs. Adapted for the Fife, Violin or German Flute (Vol. 1, c. 1778, p. 41) and in The Hibernian Muse. A Collection of Irish Airs (c. 1790, No. XLV, p. 28), in the latter with the title "An Irish Mad Song". In fact here it was for the first time described as "Irish".


The tune was also included in the Scots Musical Museum (Vol 3, 1790, No. 267, p. 276-7), here with two sets of lyrics. It is not clear how old these were but at least by adding these texts publisher Johnson implicitly claimed the melody as Scottish. David Sime in his Edinburgh Musical Miscellany (Vol. 2, 1793, No. LIX, p. 146-7) again used the old words. After the turn of the century the tune remained popular and found a place in more collections of all kinds.


At that time there was a certain obsession with classifying songs after their supposed national origin even if this was usually difficult or impossible to prove. In practice songs were often enough simply adopted for one or more national repertoires. This particular tune can be found in English, Scottish and Irish collections. In the end it was Thomas Moore who really defined the melody as "Irish" by using it for one of his most popular songs and that way it also came to Germany. Moore had given it its stamp of "authenticity" and for Silcher this was therefore an "Irish Melody". Why he then used the tune for a Scottish song is another question.

A considerable amount of songs from Silcher's Ausländischen Volksmelodien became very popular and later regularly appeared in other songbooks. But this was not the case with his version of Burns' "Red, red rose". There were very few reprints and it never became part of the popular singing tradition. I found this piece only in one later songbook, Wilhelm Meyer's Volks-Liederbuch. Auserlesene ältere und neuere Volkslieder und Nationalgesänge des In- und Auslandes mit ihren eigenthümlichen Sangweisen (1873, No. 83, p. 90-1), here in a four-part arrangement for male choirs. O. L. Lange's Ausländischer Liederschatz (1886 , No. 30, p. 38) includes the same tune, but a different translation. He even added an English text, not Burns' original lyrics but somewhat strangely some verses of "My Lodging is on the cold ground".


Otherwise this song became more popular in Germany as a Lied, with new tunes written by a number of more or less notable composers. I have already mentioned Friedrich-Wilhelm Jähns who had been the first to set a translated text to new music in 1836. Heinrich Marschner offered a new setting in 1839, in Lieder nach Robert Burns von F. Freiligrath für eine Sopran oder Tenorstimme mit Begleitung des Piano-Forte, Op. 103 (No. 7, p. 14) as did Alexander Fesca in 1842 in Drei Lieder von Robert Burns in Musik gesetzt für eine Sopran- oder Tenorstimme mit Begleitung des Pianoforte, op. 21 (No. 2).


The most popular and most often reprinted new tune was surely Robert Schumann's, written in 1840, immediately after the publication of Wilhelm Gerhard's book of translations but published only in 1849 (in: Lieder und Gesänge für eine Singstimme, Op. 27, No. 2). His version was later even included in popular songbooks like F. L. Schubert's Concordia. Anthologie classischer Volkslieder für Pianoforte und Gesang (Vol. 2, 1861, No. 393, p. 58). All in all I have found nearly 40 relevant publications listed in Hofmeisters Monatsberichten until 1900. That is quite a lot - even though not as much new settings as for "My Heart's in the Highlands", the most popular song by Burns in Germany - and would be worth further investigation. Bur that's another story.