Scottish songs used to be quite popular in Germany. But the repertoire originally created and published in Scotland during the 18th century - from Ramsay to Burns - only began to appear there since the early 19th century. A few of these songs became very popular and part of the common singing repertoire. Others were occasionally included in some anthologies without really gaining a foothold.

An not untypical example is "The Bush aboon Traquair", one of the songs first introduced by Allan Ramsay in his ground-breaking Tea-Table Miscellany in 1723. During the 18th and 19th centuries it surely was one of the most popular and most often printed Scottish songs in Britain. Here is the version that can be found in the first volume of the Scots Musical Museum in 1787 (No. 80, p. 81): 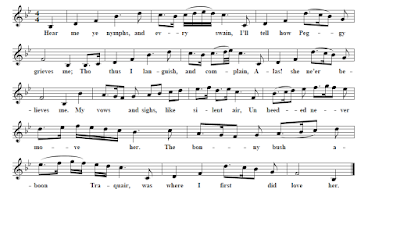 Hear me, ye nymphs, and every swain,
I'll tell how Peggy grieves me;
Though thus I languish, thus complain,
Alas! she ne'er believes me.
My vows and sighs, like silent air,
Unheeded, never move her;
At the bonny bush aboon Traquair,
'Twas there I first did love her.

The day she smil'd, and made me glad,
No maid seem'd ever kinder;
I thought myself the luckiest lad,
So sweetly there to find her.
I try'd to sooth my am'rous flame,
In words that I thought tender:
If more there pass'd, I am not to blame,
I meant not to offend her.

Yet now the scornful flees the plain,
The fields we then frequented,
If e'er we meet, she shews disdain,
She looks as ne'er acquainted.
The bonny bush bloom'd fair in may,
Its sweets I'll ay remember;
But now her frowns make it decay;
It fades as in December.

Ye rural powers, who hear my strains,
Why thus should Peggy grieve me?
Oh! make her partner in my pains,
Then let her smiles relieve me.
If not, my love will turn despair,
My passion no more tender;
I'll leave the bush aboon Traquair,
To lonely wilds I'll wander.

In Germany this song was published several times, at first in 1817 and then occasionally throughout the century, usually together with a German translation of the original text. But in one case the tune was combined with a poem by a popular German writer that gave the song a completely different meaning.

In the following I will at first sketch the publication history of "The Bush aboon Traquair" in Britain during the 18th century and then discuss the different German versions published in the 19th century. This is all quite interesting because we can see the rather hesitant and somewhat slow introduction of the Scottish song repertoire in Germany. Anthologies with a more systematic approach only appeared since the 1860s.

Ramsay (1668-1758; see Wikipedia; see also Gelbart 2012; Pittock 2007; Newman 2002) was not only a poet, playwright, editor and publisher but also an intellectual on the search for a Scottish cultural identity and surely one of the great literary innovators of his time. The Tea-Table Miscellany offered mostly new or edited texts for popular older tunes. With this collection he laid the groundwork for the modern repertoire of Scottish national songs. It was also a kind of early prototype of later collection of national songs or Volkslieder. He can be seen as the one who "started the process of organizing collections around national - and even nationalist - symbolism [...]. Suddenly tunes were being called upon less for immediate practical use [...] and more to represent, and later characterize, a nation - to be a body of national music" (Gelbart 2012, pp. 82-3 & 85).

The text of "The Bush aboon Traquair" was written not by Ramsay himself but by one Robert Crawford (1695-1733), one of the "ingenious young Gentlemen, who were so well pleased with my undertaking, that they generously lent me their assistance" (preface 10th ed., p. vi). He also contributed some other songs, all those marked with a "C". The best known among them is "Tweedside" (pp. 7-8). Not much is known about Mr. Crawford but it seems that he died early: "he was drowned in coming from France in 1733" (see Wilson, pp. 133-4). This particular "bush" that gave the song its title was "a small grove of birches that formerly adorned the west bank of the Quair water, in Peeblesshire, about a mile from Traquair House, the seat of the Earl of Traquair" (dto.). Later visitors only found "a few solitary ragged trees" (see Stenhouse, p. 85).

Crawford wrote a new text to an already existing tune most likely of the same or a similar title. Otherwise the readers of the Tea-Table Miscellany wouldn't have known how to sing this song (see now McGuinness & McGregor 2018 about Ramsay and music). But unfortunately no earlier versions of the melody have survived. The tune was only made available about two years after the first publication of the text in two musical anthologies. It seems that both appeared at around the same time although the exact dates are not clear (see McCue in Musick, pp. xiv-xv, xix; see also McGuinness & McGregor, pp. 50-3).

Ramsay himself commissioned arrangements from Alexander Stuart, a local musician about whom very little is known, and then published them in a book of six parts with the title Musick for Allan Ramsay’s Collection of 71 Scots Songs (available at SC Digital Library). This was intended as a musical companion to the Tea-Table Miscellany (see McCue, in Musick). Apparently few copies were printed and only two have survived until today. "Bush aboon Traquair" can be found here also as the second tune (pp. 4-5).

Meanwhile in London another Scottish musician published a much more ambitious anthology: Orpheus Caledonius: Or, A Collection of Scots Songs. Set to Musick by W. Thomson. Mr. Thomson (bef. 1695-1753; see Farmer in OC, 1962) had "made a career performing 'Scotch songs' there" (Gelbart 2007, p. 34). He even sang at court and this collection was dedicated to the Princess of Wales who had "graciously heard some of the following Songs" and then "encouraged" him to publish them.

Thomson borrowed most of the texts from the Tea-Table Miscellany but without acknowledging his source. The tunes were apparently not lifted from Stuart's Musick (see McCue, p. xxi). As a Scot himself he may have known them all along. Mr. Ramsay was not happy about receiving no credit (see preface to 10th ed., 1734, p. vii)) but one can say that with this book his modernized Scottish songs were introduced to and made popular among the sophisticated London audience. The list of the subscribers is quite impressive. In fact Thomson's Orpheus Caledonius was a very successful publication (see Farmer, in OC 1962, pp. iii & v ) and a second edition with 50 additional songs came out in 1733.

At this point both Mr. Crawford's new text and the old tune were available in print. But what do we know about the song's prehistory? Nothing. No earlier variants of the tune nor any earlier texts have survived. Stenhouse claimed in his notes to the Scots Musical Museum (1839, I, p. 84; Illustrations, p. 84) that this "charming pastoral melody is ancient". That sounds like an exaggeration. The tune must of course be at least a little bit older than Crawford's text but there is no way of knowing how old it really was at that time.

Graham in his Songs of Scotland (Vol. 1, 1849, pp. 18-9) noted "that the tune was probably written down at first for some musical instrument; as its compass is too great for ordinary voices". This sounds like a reasonable assumption. But "we have no clue to any older words, nor even the tune" (Glen, p. 83) and - if it was a song and not an instrumental - the ""old song is lost" (Stenhouse, p. 84). This is different from - for example - "Tweedside", the other great hit with a new text by Crawford. Here at least some earlier variants and texts are known from manuscripts (see Cathcart 2016, at wirestrungharp). But in case of "The Bush aboon Traquair" Ramsay's project has really succeeded. All traces of possible predecessors have been obliterated. The new text has completely replaced any older versions.

Later folklorists and musicologists had some problems with Ramsay's approach (see f. ex. McAulay, p. 26, diss. p. 38; Gelbart 2012). But he was no collector in the modern sense. His aim was not to simply document what existed at that time. Ramsay - and his associates - "essentially re-wrote the repertoire" (McAulay, p.42, diss. p. 57). What they did was to revitalize these songs and tunes and make them more popular than they had been before. A melody like the one of "The Bush aboon Traquair" was saved from obscurity and - with new words - codified in print. It started a new life and then crossed social, cultural as well as even national boundaries.

This "new" old song quickly became a standard, the text was regularly reprinted and the tune was supplied with new texts. Already in 1725 Mr. Crawford's brand-new words were included in Ambrose Philips' Collection of Old Ballads (Vol. 3, No. LII, pp. 253-4). First and foremost it was Ramsay himself who promoted the song. The text was easily available in the numerous new editions of the Tea-Table Miscellany. The 10th already appeared in 1734.

The tune or the whole song with Crawford's text also appeared in songbooks of all kinds throughout the century, for example in publisher John Watts' popular anthology The Musical Miscellany; Being a Collection of Choice Songs Set to the Violin and Flute By the most Eminent Masters (1729, Vol. 2, p. 97-8), Barsanti's Collection of Old Scots Tunes (1740, p. 7), James Oswald's Caledonian Pocket Companion (Vol. 2, 1747, p. 17), Geminiani's Treatise of Good Taste in the Art of Musick (London 1749, pp. 18-21), a Compleat Tutor for the Guittar, a fashionable instrument at that time (ca. 1750s, p. 20), Robert Bremner's Thirty Scots Songs for a Voice and Harpsichord (1757, p. 18-9) or Johann Samuel Schröter's Six Lessons from the Favourite Miscallaneous Quartettos (1777, p. 7). The tune was also still recycled for the stage, for example in Thomas Linley's Duenna (1775, p. 38) with new words by Richard Brinsley Sheridan: "O had my love ne'er smil'd on me". This song was performed by Michael Leoni, one of the most popular singers at that time.

Of course the editors of all the ambitious anthologies of Scottish songs that appeared in the 1790s couldn't leave out this old standard. It was the first song in William Napiers Selection of the most Favourite Scots Songs, Chiefly Pastoral (Vol. 1, No. 1, p. 2). Urbani included it in his Selection of Scots Songs (Vol. 1, 1792, pp. 24-5) and George Thomson commissioned an arrangement from composer Ignaz Pleyel for the very first volume of the Select Collection Of Original Scotish Airs For The Voice (1793, No. 5; see also later ed., 1803, No. 5). The song can also be found in Joseph Ritson's anthology Scotish Song in Two Volumes (1794, Vol. 1, No. XLVII, pp. 101-2), here again with a reference to Mr. Crawford as the the author.

"The Bush Aboon Traquair" survived into the 19th century and was always easily available (see also Copac). The text was regularly reprinted in songsters, in collections of poetry, on broadsides and in chapbooks like for example one published in Stirling around 1820 (at the Internet Archive), here as an oldie together with Burns' "Lovely Jean", the popular hit "The Death of Wolfe" and others. The tune appeared in numerous publications, for example in a piano arrangement in Gow's Vocal Melodies of Scotland (c. 1816, p. 2) or as sheet music, for example in an arrangement for harp by Philippe-Jacques Meyer (c. 1820, at the Internet Archive). The song with text and tune together can be found in many songbooks, both popular and antiquarian. In fact this old classic never really vanished from the music market and remained a standard. At the end of the 19th century it was still one of the best known Scottish songs.