For different reasons I have become interested in songbooks published in the German speaking countries during the 19th and early 20th century. Countless collections for all kinds of purposes were published during that era. Especially songbooks for school were produced and sold in great numbers. Every pupil needed a couple of them during his school career and for the editors - mostly experienced teachers - they became a source of steady income. Some of these collections remained available for several decades, sometimes even after the death of the original editor. Not at least the authorities - the government as well as the churches - supervised closely the repertoire of songs taught in schools because they saw music as an important means of patriotic education.

Here I will present two influential and widely used songbooks for girls, one by Andreas Barner from Karlsruhe and the other by Philipp Beck from Köln. In both cases it is the second volume - intended for pupils aged 10 to 14 - of a three-part series:

Barner (1835-1910, see Schwäbische Orgelromantik) was a music teacher and composer but also for more than 40 years organist at the court in Karlsruhe. A couple of his other works are listed in Hofmeisters Monatsberichten, for example a Siegesfantasie und Fuge über "Heil unserm Fürsten Heil"(Hofmeister XIX, September 1871, p. 193) or an instructional book for singing lessons (dto., Januar 1879, p. 31). But this Liedersammlung für Töchterschulen was clearly his most successful publication. The first edition came out in 1879 and was then regularly reprinted. This here is the fifth edition from 1902 and in the preface he noted that his "song collection [...] is becoming more widespread, even abroad". A 6th edition was published in 1909, a year before Barner's death (see DNB 365171921). All in all his collection remained available for more than 30 years.

Even more popular and more widely used was another song book for girls' school:

The editor was at that time director of the Evangelische höhere Töchterschule und Lehrerinnen-Bildungsanstalt in Köln. Some contemporary newspaper articles from the Zeitungsauschnittsammlung of the University Library in Köln offer a little more information about Philipp Beck (ZAS, II.47, p. 36, II.106, p. 78, II.139, p. 106, 109). He was born in 1843, studied at the seminary in Neuwied and already in 1876, at the age of 33, became director of this school. He remained there for 35 years until his retirement in 1911 and died four years later, in 1915. Apparently this song collection was his only music-related publication but he also edited and revised some volumes of a history book for girls' schools (see GEI-Digital).

The song repertoires presented by Barner and Beck are of course very similar to each other and around 20 pieces can be found in both collections. There is a heavy dose of patriotic propaganda like, for example, Hoffmann von Fallersleben's "Kaiser Wilhelm":

The poor girls had to sing it and I wonder if they really enjoyed these kind of songs. Then there are considerable number of "Heimatlieder", for example "Heimat, Ade!", a German text for the tune of "Robin Adair" that had became a standard in schoolbooks since the 1880s. But the editors also included a lot of popular pieces by composers like Beethoven, Mozart, Schumann, Mendelssohn, Abt etc as well as so-called "Volkslieder" or "volkstümliche Lieder", also a genre massively promoted in schools. In fact the "folk" learned the "folksongs" first and foremost in the school. In both collections we can find for example the "Loreley" ("Ich weiß nicht was soll es bedeuten…"), a poem by Heinrich Heine with a tune by Friedrich Silcher, one of the most popular German songs ever: 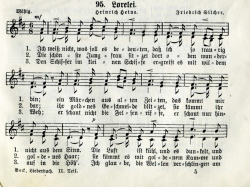