Here is another nice and somehow rare songbook that I have acquired recently. It is only available in very 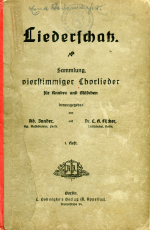 few libraries and also not that easy to find in second hand bookshops. As far as I know this booklet has not yet been digitized.

Adolf Zander (1843-1914, see Wikipedia) was a highly respected composer, organist and choirmaster in Berlin. The co-editor Dr. Fischer worked, also in Berlin, as a schools inspector. The latter had organized concerts with all pupils of the first grade from the schools in his district singing as a big choir - "das letztemal über 2200 Kinder" - and the "Liederschatz" served as a songbook for these events (see p. 3, preface 1st. ed.). Later shows were apparently even more successful:

The repertoire in this booklet - all arranged for four voices - is not untypical for these years. First there is a considerable number of religious songs and then a lot of patriotic pieces like "Auf Kaiser Wilhelm I.", "Kaiserlied", "Soldatenlied", "Das treue deutsche Herz" and "Vaterlandssänger" which would be rather indigestible today. The rest of the collection is made up of the popular standards (i. e. "volkstümliche Lieder" and some "Volkslieder") that are mostly known from other collections as well as some works by Zander himself. Apparently the editors had a special preference for spring songs: "Frühlingschor", "Frühlingsglocken", "Frühlingsgruß" and more. The only foreign song included here is "Robin Adair", interestingly with both German texts: "Treu und herzinniglich" and "Heimat Ade": 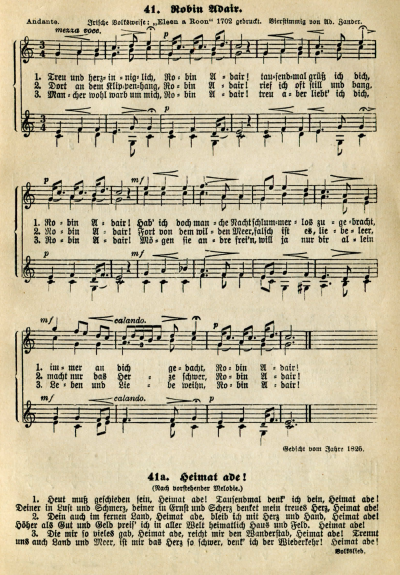