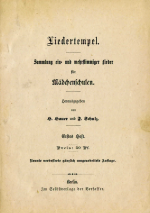 Here I have another song collection for girls' schools with the title Liedertempel, edited by Hermann Hauer (1812-1888) and Ferdinand Schulz (1821-1897). It consists of three small booklets with 68, 80 and 104 pages. Original copies of these songbooks are apparently not that easy to find. I only saw them in one library catalog. The Bibliothek für Bildungsgeschichtliche Forschung in Berlin has different editions - from the 3rd to the 13th - of some booklets of this series (no direct link to the results possible, search the catalog for "Liedertempel").


The 13th edition of booklets 1 & 2 as well as the 12th of No. 3 were listed in Hofmeisters Monatsberichten in 1900 (p. 350). I have the 9th edition of Nos. 1 & 3 and the 10th of No. 2. One may assume that they were published some years earlier, perhaps during the '80s or early '90s. I haven't yet been able to find out when this series was first printed.
Hermann Hauer worked as music teacher in Berlin but was also busy as a composer, organist and choirmaster. Some information about him can be found in Ledebur's Tonkünstler-Lexicon Berlin's (1861, pp. 226-7, at Google Books) and in an obituary published in the Yearly Chronicle of his school in 1889 (Friedrichs-Gymnasium. Jahresbericht über das Schuljahr 1888-89, p. 16, at Google Books). He was born in the town of Dardesheim near Halberstadt in the Harz mountains. His father was a cantor and from early on in his youth he sang in local choirs and played the organ in church. In 1832 he moved to Berlin where he studied music theory, organ and singing.

Hauer became member of the renowned Sing-Akademie and organist at a church but was also busy as a choirmaster. He founded two choral societies, one a Männergesangsverein for journeymen, the other one a mixed choir. For example in 1849 two concerts with the latter were favourably reviewed in the Neue Berliner Musikzeitung (Bd. 3, 1849, pp. 100, 389, at BStB-DS). In 1856 he was hired as a singing teacher by a Gymnasium in Berlin where he worked until his retirement for health reasons in 1888.

His partner and co-editor Ferdinand Schulz - born in a town in Thüringen - had a quite similar life story (see Tonkünstler-Lexicon, pp. 527-8). He also came from a musical family, his father was cantor and organist and in 1841 he moved to Berlin where he studied music theory, organ and piano. In 1843 he was hired as a singer for choir of the Berlin Cathedral (the Domchor) and later also founded a Männergesangsverein, became the conductor of a church choir and worked as a music teacher. Schulz also made himself a name as a composer, especially of pieces for the piano, songs and church music. More than 70 of his works are listed in Hofmeisters Monatsberichten. He also edited song collections, for example a Sammlung der beliebtesten Freimaurer-Gesänge für eine Singstimme mit leichter Piano-Begleitung (Berlin 1872, online available at BStB-DS). 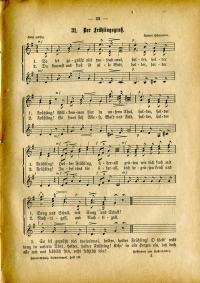 The Liedertempel is not included in their list of works in the Tonkünstler-Lexicon. So it's likely that it was only published after 1861. This collection is quite interesting but looks a little bit old-fashioned compared to other songbooks for schools from the late 19th century. The amount of so-called "Volkslieder" is rather small. Apparently they preferred songs by notable composers, mostly what was known back then as "Lieder im Volkston", for example by Nägeli, Abt, Reichardt, Kreutzer, Schumann, Mendelsohn-Bartholdy and by Silcher. Of course they couldn't resist including some of their own works. Nonetheless their collection was in use for several decades although after the turn of the century it disappeared from the market and was eclipsed by other, more modern songbooks.