I am always amazed to see how many songbooks of all kinds were published in the German speaking countries during the 19th and early 20th century. Sometimes one gets the impression that everybody was singing. But at least this must have been a very lucrative market for both publishers and professional musicians who did their best to comply with the increasing demand for printed music, especially for songs. The last four parts of the series "Old German Songbooks" were about collections for schools. Here I will present a particularly interesting publication aimed at the general public, in fact the growing number of dedicated amateur musicians with their pianos or guitars who loved to make music at home or with friends:

The editor, Thomas Täglichsbeck (1799-1867), was at that time a well known musician, a conductor, composer and violinist. He had been born in the town of Ansbach and from early on in his youth was trained in music. He then went to study in München, got his first job as a Kapellmeister there in 1820 and also made himself a name as a violin virtuoso. In 1827 Täglichsbeck was hired by the ruler of the little principality of Hohenzollern-Hechingen and as a Hofkapellmeister he managed to turn the small local orchestra into an excellent ensemble. After the dissolution of this Duodezfürstentum in 1849 he first moved to Stuttgart but in 1852 followed Fürst Konstantin to his estate in Silesia. Five years later he retired from his post, spent some time in Dresden and Munich and died in 1867 in Baden-Baden (summarized from Schilling 1838, pp. 565-6, Frick 2009, pp. 511-12; Eitner in ADB 37, 1894, pp. 359- 60, at BStB-DS; see also Wikipedia).

Thomas Täglichsbeck was also a very industrious composer and his works were regularly listed in Hofmeisters Monatsberichten. He wrote instrumental pieces, for example for the violin, as well as some symphonies, music for operas and both religious and secular songs (see some of his works at IMSLP). But - and for some reason this is not mentioned in any of the biographical texts about him I have seen - between 1842 and 1852, the year he moved to Silesia, he also produced an astonishing number of songbooks almost on the assembly line for publisher Karl Göpel from Stuttgart. I don't know if it was his own idea or Göpel's. But this series of publications look like a well-planned and well thought out endeavor, an attempt at systematically fulfilling the new rising demand for printed music especially by the now ubiquitous choral societies (the Männergesangvereine) and the amateur musicians from the educated Bürgertum.


Their major publication was Deutsche Liederhalle. Sammlung der beliebtesten Lieder und Gesänge mit mehrstimmigen Melodien, a massive collection of part-songs for choirs. This was published between 1842 and 1849 (see Hofmeister XIX, Februar 1842, p. 26 & Dezember 1849, p. 152) in more than 30 booklets that were then bound together to three big volumes with altogether more than 1000 songs (Vol. 3 online available at the Internet Archive & BSB).

In a subscription offer for the Liederhalle (in Deutsche Pandora, 4, 1841, [p. 239/40], at the Internet Archive) Göpel explicitly referred to the "in recent times broadened musical education among all classes":

He acknowledged this new demand and of course also claimed to offer exactly what was needed by everyone: a new "National-Werk", a most complete collection of the most popular old and new songs.

Göpel and Täglichsbeck clearly tried to cover all segments of this promising market. Another publication was Orpheon. Album für Gesang mit Begleitung des Pianoforte, 36 booklets - later bound to six volumes - published during the same years as the Liederhalle (see Hofmeister XIX, November 1842, p. 178 & Januar 1848, p. 14; see also the ad in the Allgemeine Zeitung, No. 328, 24.11.1842, p. 2623, at Google Books) with all the songs arranged for one voice with piano accompaniment.


Typical for the collections were deliberately bombastic titles and the name of a well known professional musician on the cover, in this case Täglichsbeck. Of course thes kind of books were also "elegantly designed" but nonetheless sold for "the lowest prices" - a lot of music for little money! - as can be seen for example from an advertisement in the Jahrbücher des deutschen National-Vereins für Musik und ihre Wissenschaft (Vol. 4, Nr. 51, 22.12.1842, p. 408, at Google Books). 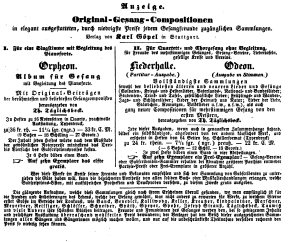 At that time the students at the universities also used to sing a lot. Therefore Täglichsbeck also had to serve as the musical editor of a commercium book, Göpel's Deutsches Lieder und Commers-Buch with 500 songs (see Hofmeister XIX, Januar 1848, p. 11; online available at Hathi Trust Digital Library). This massive collection must have been quite successful. 10 years later a second edition with 700 songs (online available at Google Books) came out, although with much less involvement by Täglichsbeck because he was living in Silesia at that time.


In the Introduction to the Lieder- und Commersbuch (p. iii ) publisher Göpel pointed out the "new fondness" for the so-called "Volkslied" and that he had to include some of these kind of songs in that publication. But apparently he saw it as necessary and commercially viable to dedicate a whole book to this genre. The "Buch der Lieder", according to the subtitle a "Sammlung volksthümlicher Lieder und Gesänge", was the result. These two terms, "Volkslied" and "volkstümliche Lieder", were at that time more or less interchangeable, especially among publishers. "Volkslieder" weren't so much the songs of the people but "for" the people, and the "people", the target group of publications like this one, were at first not the lower classes but the educated middle classes, the Bürgertum, those who could afford to buy musical instruments and these kind of songbooks.

This collection included all in all 197 songs with accompanying arrangements for both guitar and piano. Interestingly there are a lot of patriotic and political songs. But this should be no surprise as 1848 was the year of the revolution. Some are even surprisingly radical and critical, as for example Hoffman von Fallersleben's "Lied vom deutschen Philister". For a couple of melodies more than one text was included. In case of Henry Carey's tune for "God Save The Queen/King" they have added altogether 8 sets of lyrics. Some other foreign standards also found a place in this collection, like "Robin Adair" (No. 40) and "Des Sommers letzte Rose" (No. 92), here even with Thomas Moore's original words. 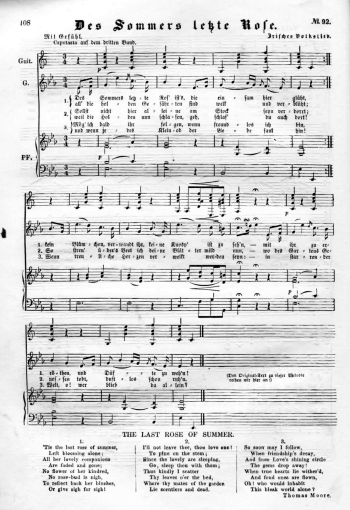 Göpel and Täglichsbeck practised the fine art of musical recycling and used songs that already had been included in earlier collections. "Robin Adair", to name only one example, can also be found in the Lieder- und Commersbuch (No. 378, p. 541) and in Volume 3 of the Liederhalle (p. 438). But they also practised the even finer and more popular art of musical piracy and completely refrained from acknowledging their sources. Even the names of the authors are often missing. This was noted by a reviewer (Allgemeiner Musikalischer Anzeiger 1, No. 3, 20. Januar 1848, p. 12) who wondered why Song No. 4 was included here "completely abandoned ["ganz herrenlos"], without the poet's and composer's names":

On first sight I find even more songs without appropriate credit for the writers, for example the "Matrosenlied" by Pohlenz & Gerhard (No. 69) and Geibel's "Der Mai ist gekommen" (No. 71). It seems to me that they have also plundered Friedrich Silcher's works (see No. 58, "Abschied"). But this kind of musical piracy was very common at that time. Otherwise it would not have been possible to offer such a book for a reasonably cheap price.

Täglichsbeck's collections were later also used as a source by editors and publishers. For example it was his version of "Robin Adair" that appeared in other songbooks. That's the way it was back then. Everybody "borrowed" from everyone. It is no wonder that at the end of the century many song collections looked suspiciously similar to each other. The same songs were recycled over and over again and it seems to me that this was one major reason for the standardization of the repertoire.