What kind of songs did the German children sing in school in the early 20th century? Mostly so-called "Volkslieder", of course a lot of patriotic ditties as well as some religious songs. But besides these they also learned a number of foreign songs, especially from Britain and even the USA, with German texts. We can take for example a look at one popular collection:
Here we can find German language versions of "Robin Adair", "My Heart's In The Highlands", "Home, Sweet Home", "The Blue Bells of Scotland" and "Long, Long Ago" (pp. 52, 60, 63, 64 , 74). These are the common standards - mostly British popular hits - that had been adapted in the German speaking countries during the 19th century, in case of Burns' "My Heart's in the Highlands" even with a new tune. They can be found in numerous songbooks of all kinds and one may say that they had become an integral part of German musical culture.

But at some point teachers came up with the obvious idea that the pupils could also sing original British songs to help them learn the language. A nice example is an instruction book for English first published in 1894 and then in use at least until 1921 (see DNB 573880719):
A chapter of nearly 20 pages includes a handful of popular songs from the British Isles like "Robin Adair", "The Last Rose Of Summer", "Home, Sweet Home" and "John Anderson My Jo". But there were also complete books of foreign songs for educational purposes. Here are two of them, both first published between 1909 and 1912:

Irmer noted in his preface that "the idea to use foreign folk tunes for the teaching of modern languages is getting more and more popular among experts" (p. 4). He was the co-author of an instructional book for French (see Google Books) and - according to the title page of his collection - the headmaster of a school in Silesia. Julius Stockhaus had already published a music book for schools and his Französische und Englische Volkslieder were intended als supplement to that work. He and Simon claimed in their introductory notes that only the real folk songs ["das echte, im Volke lebende Lied"] should be used in school "weil es allein geeignet ist, in den Geist und die Gefühlswelt des fremden Volkes einzuführen".

I can't say anything about the French songs in these collections. But the selection of British "folk tunes" is quite interesting. Both offered of course partly the same pieces, among them most of the popular standards from the 19th century like "The Last Rose of Summer", "Home, Sweet Home", "My Heart's in The Highlands", "Auld Lang Syne", "The Minstrel Boy", "Rule Britannia" and "Ye Mariners of England". Simon and Stockhaus also included "Robin Adair", "Long, Long Ago" and even the "Roastbeef of Old England". 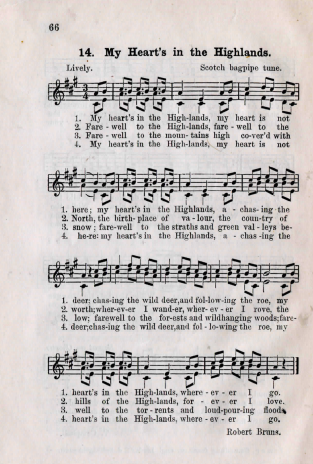