I am at the moment busy researching the history of the British song "Robin Adair" in the German speaking countries during the 19th and early 20th century. It is often necessary to check particular songbooks from that era to find out which of the known tune variants or arrangements had been used there. I was surprised to find out that many of these old books still can be found in the catalogues of second-hand bookshops and most of the time they were surprisingly cheap. Now I have a pile of these old songbooks lying around here. Some of them are not that easy to find in libraries and most of them have not yet been digitized.


So I tried to scan some of them myself. Of course these scans are not perfect because my technical abilities are a little bit limited. But I hope they suffice as simple working-copies. These books are all out of copyright and there should be no problem posting them here. I regard them as historical documents. They show what the people used to sing back then, what the publishers and editors wanted them to sing and what kind of songs were popular at that time. These are mostly collections of - or including - so-called "Volkslieder" and "volkstümliche" Lieder.


Here is for example one book that I found very interesting. It is not that difficult to get from second-hand bookshops but I haven't seen it in any of the library catalogs I know. 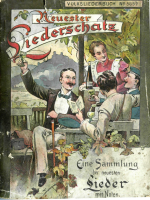 As was often the case with songbooks this publication is undated. But here Hofmeisters Monatsberichte can help out. In fact it was first listed there in November 1899 (p. 537, via Hofmeister XIX). This is a cheap and handy pocket volume that users could easily take with them to the beer garden or on a walking tour. The picture on the cover seems suggest these kind of activities. The copy I have looks very worn so perhaps it was even used for the intended purposes. 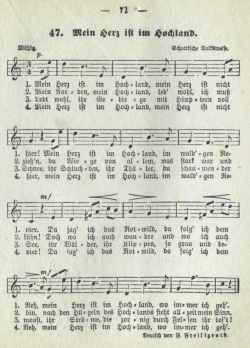 The title is a little bit misleading. The songs included here were for the greatest part surely not the "most recent". Instead the publisher simply reprinted many of the old standards, all the songs that had already been recycled numerous times in collections of all kinds. Typical examples are the "Matrosenlied" by Pohlenz & Gerhard, one of the most popular "Volkslieder" of the 19th century; "Mein Herz Ist Im Hochland", the German version of Burns' "My Heart's In The Highlands", here as usual in Ferdinand Freiligrath's translation and with a different tune; "Hochland's Sohn" ("The Bluebells of Scotland"), another popular import from Britain, as well as half a dozen songs by Friedrich Silcher - always a safe bet for compilers of songbooks - and assorted time-tested classics by Weber, Kreutzer, Mendelssohn, Schubert & co.

Nonetheless it is a pleasant collection that shows what was popular or "volkstümlich" at that time. One may assume that for most of these pieces many people wouldn't have even needed a book like this one. They were at that time part of the standard repertoire, songs that (nearly) everybody already knew.
Eingestellt von Jürgen Kloss um 7:45 PM