One of the most industrious and dedicated editors of songbooks for choirs in Switzerland was Ignaz Heim (1818-1880; see ADB 50, 1905, pp. 133-5, at BStB-DS and wikisource; a short summary at Wikipedia). Heim came from the town of Renchen in Baden, worked for some years in Freiburg but in 1852 he moved - not at least for political reasons - to Zürich. There he was busy as a choirmaster but also compiled numerous collections of arrangements for mixed and male choirs.

His most popular publication may have been the Sammlung von Volksgesängen für den Gemischten Chor, a quasi-official songbook for schools as well as Gesangsvereine and other societies and clubs published under the auspices of the committee for music of the school council in the town of Zürich. It first came out in the early 1860s and remained in print for nearly a century. For example the 64th edition was published in 1898 (see catalog entry in Nebis) and the 137th in 1950 (see Nebis). Thankfully the 30th edition (1883) has been digitized and is available online at the Internet Archive:


Another of his successful endeavors was a series of six books with arrangements for male choirs, of which I have the first volume:
This book was first published in 1863 (1st edition available online at BStB-DS & Google Books). The 9th edition came out in 1882. That year it was listed in Hofmeisters Monatsberichten (p. 361, via Hofmeister XIX). It is an interesting and worthwhile collection but - as usual - the term "Volksgesang" didn't mean songs by the "folk" - in the sense of the modern ethnological definition - but for the people: Heim's aim was to produce simple, but appealing arrangements of songs old and new for the numerous Gesangsvereine - choral societies - that were flourishing. This book therefore includes not only some of his own songs but also pieces by - for example - Silcher, Mendelssohn, Nägeli, Schumann, Weber as well as some so-called "Volksweisen".

Most interesting here is one of the earliest Swiss versions of "Heimat, Ade!", a text of uncertain origin written for the popular tune of "Robin Adair" (No. 18, pp. 41-2) that later became a standard in German songbooks for schools. But Heim also included the well known German text "Treu und herzinniglich" by Wilhelm Gerhard (1826): 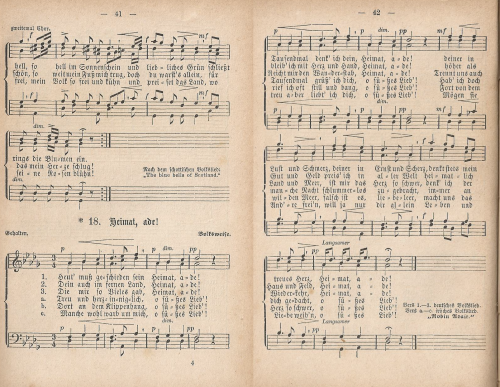 But most impressive is a list of his publications that were offered for sale at that time: 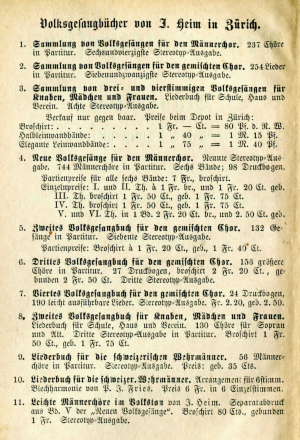