One of the most popular songs in 19th century Germany was surely "Robin Adair". First and foremost it was known as a so-called "Volkslied" with two different texts, "Treu und herzinniglich" by poet Wilhelm Gerhard and "Heimat, Ade!" by an unknown author. But there were also attempts at new translations and these translations were then set to music anew.

For example one rather free adaptation was created by John Henry Mackay (1864-1933, see Wikipedia), a German poet of Scottish descent. This text was first published in 1888 in Fortgang. Der "Dichtungen" erste Folge. It can also be found in Gesammelte Dichtungen. Mit der Photogravüre des Dichters (Zürich & Leipzig [n. d.], p. 377, at the Internet Archive):

Popular piano virtuoso and composer Eugen d'Albert (1864-1932, see Wikipedia), also born in Scotland, then set this poem to music in 1899:
The tune looks of course quite different from the original: 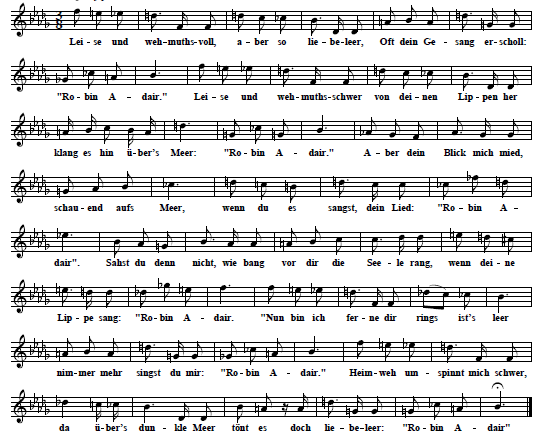 Not at least the publisher added a new English text, a translation of Mackay's poem:

Softly yet wearily,
Seeming for nought to care,
Sounded thy song to me,
"Robin Adair."

In effect this has become a completely different song. Only the name "Robin Adair" has been retained but otherwise there was a different text as well as a new tune. But one may say that it has remained part of the song family. The connection to the original is still there.