One of the most popular songs in 19th-century Germany was "Mein Herz ist im Hochland", an adaptation of Robert Burns' "My Heart's in the Highlands". It was listed 136 times in Hofmeisters Monatsberichten (found via Hofmeister XIX) between 1836 and 1900. There were a couple of translations available but the one most often used was by poet Ferdinand Freiligrath (1810-1876). That text was first published on February 20th, 1836 in the Blätter zur Kunde der Literatur des Auslands (Vol. 1, No. 4, p. 13, at the Internet Archive) and later reprinted in several collections of his works.


In fact Freiligrath happened to be among the first who translated poems and songs by Burns into German language (see Selle, pp. 60-66) and these as well as his adaptations of other poets' works were very much appreciated by composers throughout the 19th century. Numerous new tunes were written for these texts and his "Mein Herz ist im Hochland" alone was set to music more than 70 times (see Fleischhack pp. 18-20). Besides that this piece was also immensely popular as a so-called Volkslied (national air) and one can find it in a great number of relevant songbooks. The database at the site DeutschesLied.com lists 81 publications with this song but that number is far from complete.


At the moment I am trying to sort the tunes used in the German speaking countries for this Volkslied. Strangely the original one - published first in 1790 in the 3rd Volume of the Scots Musical Museum (No. 259, p. 268, available at the Internet Archive) - seems to have been unknown to compilers and editors of songbooks. Instead they resorted to others and so far I have counted five different melodies applied for Freiligrath's text.


The first one to publish the song as a Volkslied in Germany was Friedrich Silcher in 1837 in the 2nd booklet of his collection Ausländische Volksmelodien, mit deutschem, zum Theil aus dem Englischen etc. übertragenem Text, gesammelt und für eine oder zwei Singstimmen mit Begleitung des Pianoforte und der Guitarre gesetzt (No. 1, p. 1, at the Internet Archive; date from Hofmeister XIX, Nov & Dec 1837, p. 142 and Bopp 1916, p. 206). I have written a little bit about Silcher (1789-1860) - composer, arranger, choirmaster, music educator, and one of the most important and influential promoters of this particular genre - in my detailed story of "Robin Adair" in Germany (Chapter 4, on JustAnotherTune.com.


This interesting collection of foreign tunes with German texts including accompanying arrangements for piano and guitar was originally published in 4 volumes between 1835 and 1841. Here we can find Irish and Scottish but also Italian, Portuguese, Russian, Scandinavian and even Persian songs. Most of them were borrowed from Thomas Moore. They were of course not particularly authentic in an ethnological sense but nonetheless this work reflects and represents the great fascination with more or less "exotic" songs in Germany during the 19th century (see Bopp 1916, p. 100-105, Schmoll-Barthel in Schmid, pp. 114-9). Apparently this collection was well received and then afterwards reprinted several times. I found an undated edition with only piano arrangements that may be from the late 1860s or early 70s because it was bound together with a reprint of Silcher's Deutsche Volkslieder published in 1869:
Here "Mein Herz ist im Hochland" can be found as No. 11 on p. 15: 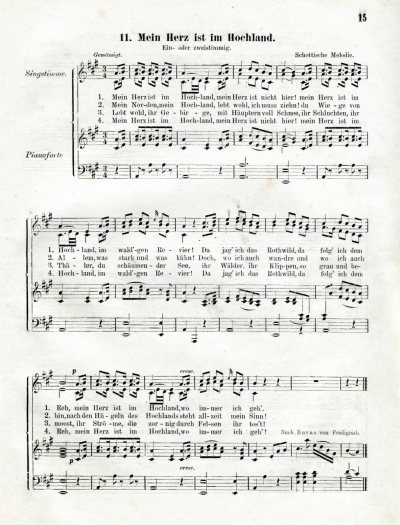 The tune used by Silcher is identified as "Schottische Melodie" but I must admit that I am not familiar with it. I haven't yet seen it in a Scottish song collection and for me it doesn't even sound Scottish. It would be interesting to know where he found this melody. One may assume that he wasn't familiar with the original version in the Scots Musical Museum so he needed another one. But it is possible that Silcher composed the tune himself and simply passed it off as Scottish (No. In the meantime I found out that he borrowed the tune from Thomas Moore's "Oh! Guard Our Affection" in the Popular National Airs V, 1826; see this blogpost about Moore's "Scottish" Songs, 6.6.2015 [note added 14.1.2016]). In fact he also wrote new melodies for a considerable number of the German "Volkslieder" published in his song collections and first sold them as authentic "Volksweisen". This he only admitted much later. Nearly a third of those published in the Volkslieder für Männerstimmen since 1826 were his own productions (see Bopp, p. 167).


Silcher's publications were generally very influential and many of his "Volkslieder" became immensely popular. But interestingly in this case his version didn't prevail. As far as I know it was recycled only occasionally in songbooks for schools, for example by Weeber & Krauss in Vol. 5 of their Liedersammlung für die Schule that was first published in 1852 (see in this blog: Old German Songbooks, No. 7).