In a previous article I have discussed the first publication of "Mein Herz ist im Hochland" as a so-called "Volkslied" in 1837 by Friedrich Silcher. But since 1836 numerous composers also wrote new tunes for this text. The first one was Friedrich Wilhelm Jähns whose Schottische Lieder und Gesänge (here Heft 2, No. 1, pp. 2/3) were published that year. Until 1840 works by Greulich, Tomaschek, Marschner, Kücken and Schumann followed and from then on it never disappeared from the music market for the next 60 years. All in all this song was listed more than 130 times in Hofmeisters Monatsberichten (information from Hofmeister XIX) until 1900. 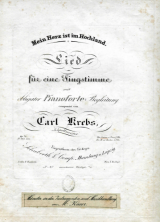 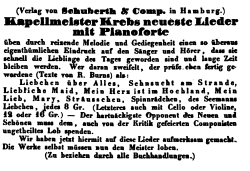 The same month an advert for these publications in the AMZ (Vol. 42, No. 52, December 1840 p. 1078) claimed that the "most recent songs" by Kapellmeister Krebs "exert with their lovely melody and solidity [Gediegenheit] such a peculiar impression on the singer and listener that they have rapidly become the favorites of the day and will stay for a long time". Interestingly some more newly published pieces are listed here.

In fact during the early '40s Krebs wrote a whole series of new settings for adaptations of Robert Burns' songs (see for example Hofmeister, März 1841, p. 44, April 1841, p. 61, Dezember 1843, p. 190). According to J. W. Christern (1850, p. 31) he had found in a bookshop Wilhelm Gerhard's collection of translations and was so fascinated by these texts that he sat down at the piano and created a "significant series of songs that can be called not only the best Krebs has composed but also almost the best of their kind". Now I don't want to judge if this somewhat bombastic claim is true. But at least Carl Krebs was one of the many composers from that era who felt genuinely inspired by the germanized Burns. And besides Gerhard's book he was also familiar with Freiligrath's works, otherwise he wouldn't have used the latter's translation of "My Heart's in the Highlands".

The tune he created for this text sounds a little strange to me and I am not particularly convinced of this attempt. But I assume it would sound much better when performed by a competent singer. I wonder if he knew the original tune. Most likely not. As far as I know it wasn't available in Germany at that time. Here is the first verse of Krebs' version. The song is through-composed and the other verses have different melody lines: 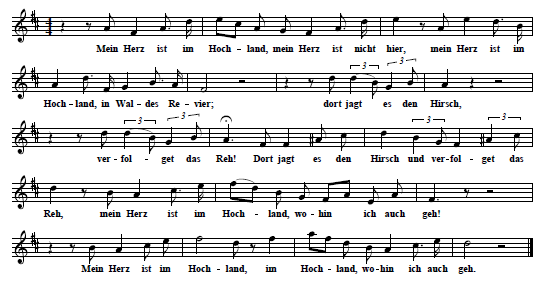 One and a half year later (see Hofmeister XIX, Juli 1842, p. 106) the song was published again in a series with the the title Auswahl der beliebtesten Lieder and an arrangement for guitar came out in November 1844 (dto., p. 173). This piece was still performed on stage in 1856. A critic of the Landshuter Zeitung (Vol. VIII, No. 51, 29.2.1856, p. 212, at Google Books) heard it from a female singer who sang the song "with a comprehensive, melodious alto voice, perfect purity and a warm sentiment and was rewarded with thunderous applause".

In July 1857 a new revised edition was announced in Hofmeisters Monatsberichten (p. 108) and as late as 1873 an arrangement for zither found a place in a musical publication with the title Münchener Gartenlaube, as can be seen from an ad in Signale für die musikalische Welt from October that year (p. 685). It seems that Krebs' version of "Mein Herz ist im Hochland" was among the most successful of the numerous new settings for this text that were published during the 19th century. In fact his series of songs based on translations of songs by Robert Burns would deserve further investigation.