In an earlier article I have discussed the very first publication of "Mein Herz ist im Hochland" - an adaptation of Robert Burns' "My Heart's In The Highlands" - as a "Volkslied" by Friedrich Silcher in his Ausländische Volksmelodien in 1837. Even though Silcher's work was often very influential in this case his version didn't prevail and was only very rarely reprinted in later years. But others tried their hand, too, at this song and supplied it with different tunes.

The next one happened to be - 10 years later - Ludwig Erk, a music educator, choirmaster and scholar and one of the most important promoters of the genre Volkslied at that time. I have also written a little bit about him in my text about "Robin Adair in Germany" (Chapter 4, on JustAnotherTune.com) so I won't repeat it all here. His arrangement appeared in:
This was a very interesting collection of songs arranged for male choirs. The first volume (available at SLUB Dresden) had been published in 1845 and it included for example his influential version of "Treu und herzinniglich, Robin Adair". In the introduction (pp. v-vi) he had noted that the arrangements in this book had grown out of the practical work with his choirs and emphasized the "natural beauty" of these songs. Erk regarded Volkslieder as a good medium for the development of musical skills, for the understanding of what he calls the "organic form" of a song. In fact he kept his arrangements simple and clear.

Erk wrote an arrangement for three male voices. The tune he used here is of course not the original one from Burns' version and it is also different from Silcher's "Scottish melody". But nonetheless it sounds very familiar: 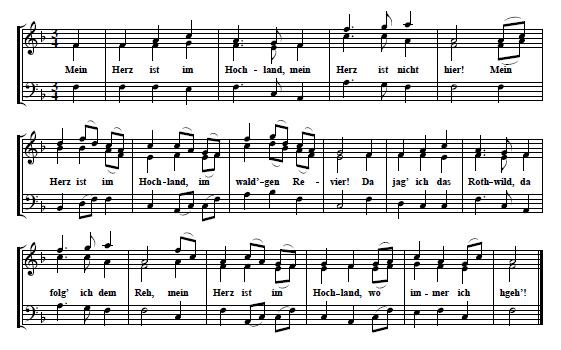 This is "Love is the Cause of my Mourning", an old Scottish - or perhaps English, but I won't discuss this here - tune that was at that time already at least 150 years old. It played a not unimportant role in the prehistory of the popular folk-song "I Loved A Lass" (see Chapters II & III in my discussion of this song family, on JustAnotherTune.com) and I must admit I was somewhat surprised to find this particular tune in this German songbook. Interestingly Erk also included additional German and English lyrics. The latter he called the "Originaltext":

Thankfully in this case Erk has named his source: "Schottische Volksweise, Nach L. van Beethoven's Schottischen Liedern. Op. 108. H. 1, Nr. 6". This was a collection of Beethoven's arrangements of Scottish songs published 15 years earlier and here we can in fact find the melody as well as the words of "Dim, dim is my eye" including the German translation. But there's no trace of "My Heart's in The Highlands" and no reference to the tune's original name:
How this ancient tune came to be used for a German version of "My Heart's in the Highlands" is an interesting story and here I can at first recapitulate what I have written about it in the above mentioned text. The very first trace for the existence of this tune may be a broadside from c. 1670 with the title Love is the Cause of my Mourning, Or, The Despairing Lover. Sung with its own proper tune (Wing L3211A, at EEBO; new edition c. 1700: Roxburghe 3.672 at EBBA). Of course we don't know if this "own proper tune" was in fact the same as the one later known by the same title. But it is a not unreasonable assumption. The earliest available source for the melody itself is a fiddle tune book from Northumberland that was compiled in 1694/5 (Atkinson Manuscript, pp. 147-8, available at at FARNE) and it seems that it was first printed in 1700 in Henry Playford's Original Scotch Tunes (p. 10-11, at the Internet Archive).

The song was then regularly reprinted and republished until the end of the century. We can find it for example both in the Scots Musical Museum (Vol. 2, Edinburgh 1788, No. 109, p. 111) and in the Edinburgh Musical Miscellany (Vol. 2, Edinburgh 1793, p. 332). Not at least the indefatigable George Thomson took care of this tune. His Select Collection of Original Scottish Airs - published since the early 90s - was a most ambitious project. Thomson hired eminent composers like Pleyel, Kozeluch, Haydn and since 1809 Beethoven to write modern arrangements and also replaced many of the old texts with new lyrics by contemporary poets like Robert Burns (for the background see f. ex. McCue 2006, McAulay 2009, p. 58-66, Fiske 1983, Will 2012, all with references to other relevant literature).

"Love is the Cause of My Mourning" was among the tunes for which he commissioned new arrangements from Ludwig van Beethoven in 1814/15 (see Cooper, pp. 22-24). It was then published in the 5th volume of his collection:
But here he didn't use the old, popular text first published by Ramsay in 1724 and since then associated with the tune. Instead new words - "Dim, dim is my eye [...]" - by one William Brown, "The Late Publisher, And Very Able Conductor of The Edinburgh Weekly Journal" were included.

Beethoven was eager to have his work for Thomson also published on the continent and therefore 25 of his arrangements including this one ended up in the edition brought out by Schlesinger in 1822. A German translation of Brown's poem was added but the name of the original tune somehow got lost. This collection then served as source for Ludwig Erk who was looking for an original Scottish tune to use for "Mein Herz ist im Hochland" . But why the latter borrowed exactly this melody is not clear.

Burns never had used this particular tune. What's amusing is that here it was combined posthumously to a German translation of one of his songs and then ended up in the repertoire of Männergesangvereine. I wonder what he would have thought of it. But I think the melody fits well to this text and Erk's arrangement sounds quite appealing. But nonetheless it did not prevail and was rarely if ever republished. I only found this version of the song in Böhme's Volksthümliche Lieder der Deutschen im 18. und 19. Jahrhundert (Leipzig 1895, No. 534, p. 399) but as far as I know it never appeared in other popular songbooks.

In fact it seems that even Erk himself was not convinced of this tune. Only a year later Hoffmann von Fallerleben's Deutsches Volksgesangbuch was published. Ludwig Erk happened to be the musical editor of this collection and here he used another familiar melody (No. 106, pp. 100-101, available at the Internet Archive):

This is the tune of "Der Mai ist gekommen", a very popular Volkslied that can also be found in this collection (here as "Wanderschaft", No. 30, p. 29). Poet Emanuel Geibel had written the words of "Der Mai ist gekommen" in 1841. It was then first published a year later. Shortly afterwards Justus Wilhelm Lyra created a tune for this poem and the song was included in a collection compiled by Lyra and some friends, Deutsche Lieder nebst ihren Melodien (Leipzig 1843, No. 62, pp. 304-5, online available at HAAB, Monographien Digital). But the the composer's credit was hidden at the end of the book (see p. 346) and therefore everybody seemed to believe that this was an old folk-tune. Only much later Lyra's authorship was revealed (summarized from: Widmaier 2008, in Historisch-kritisches Liederlexikon).

Of course we may ask why Erk used this tune. But structure and meter of Geibel's poem is exactly like "Mein Herz ist im Hochland". Perhaps the latter had used it as a model for his piece. This is not an unreasonable assumption. Emanuel Geibel was also familiar with Burns and later translated a little bit (see Selle, p. 114). He surely knew Freiligrath's adaptation. In fact Lyra's melody works quite well with this text but only gives it a more solemn or even sad character.

The tune of "Der Mai ist gekommen" was later used more often with "Mein Herz ist im Hochland". As late as 1895 Böhme (p. 400) noted that the text can also be sung to this melody. But it didn't become the standard tune and in subsequent years three more attempts at combining Freiligrath's translation with other music would follow. But this will be discussed later.